Discover both sides of the city, Buda and Pest as well! On this tour we will show you the vibrant downtown and the historic Castle Hill too. We will take you to the must-see attractions of Budapest, such as the Saint Stephen's Basilica, the Parliament, the Fisherman's Bastion and Matthias Church. Whether you are looking for a riding experience, memorable photos or a local guide, you will find it all in this urban adventure.

Sights visited on our tour:

See Budapest like kings have seen it for centuries! The Buda side of the city has always been the royal side simply because it's hilly. While on the other side of the Danube, on Pest everything is immediately so flat. There's no need to hike up, the scooters can take you uphill effortlessly. Forget climbing up the stairs. Ride up and enjoy a bird's eye view of the UNESCO World Heritage capital from uptown and take your unique photos. From atop the hill you can admire the busy metropolis that lie within reach: matchstick-sized avenues that spread out like a spiderweb, steeples and domes alternating and bridges spanning the crystal blue river. Spot the most famous landmarks, such as the St. Stephen's Basilica, the Parliament or Chain Bridge from above. 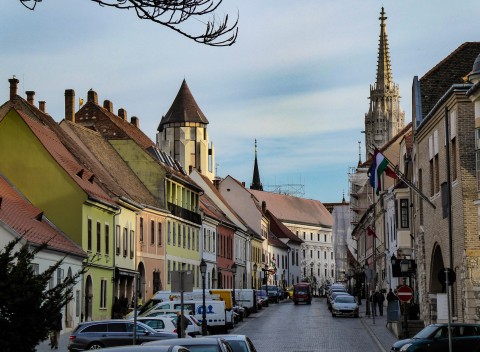 Let’s take a ride on the Buda side of the city! Enjoy the breathtakingly beautiful view and take stunning pictures from the top of Castle Hill. The Castle District has been part of the UNESCO World Heritage since 1987. Budapest consists of two sides: Buda and Pest. Most of the landmarks are on the Pest side, however, the queen of sights can be found on the Buda Hills - and that one is Castle Hill. The view from here to the city is the best, as you can look down on the River Danube and basically all of the inner city. Climbing up the hills might be difficult but not with Luna Tours: riding around the Castle District with us is easy and comfortable. We stop at all the main attractions to learn about them. So what are you waiting for? Join us today on an unforgettable journey! 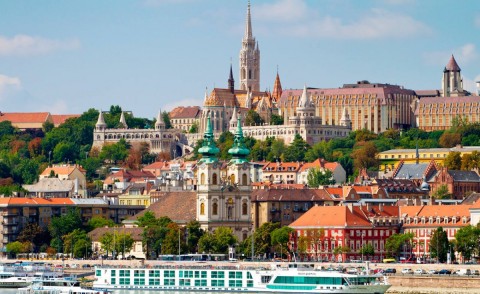 Although the photos of the Buda panorama are stunning, they don't do justice. It's much better in reality. You have to see it with your own eyes. The tiny, medieval, colourful houses of the old town of Buda tower above each other on the slopes of Castle Hill, which is crowned with Matthias Church surrounded by the Fisherman's Bastion. Having been part of UNESCO World Heritage since 1987, it's undeniably a must-see in Budapest. 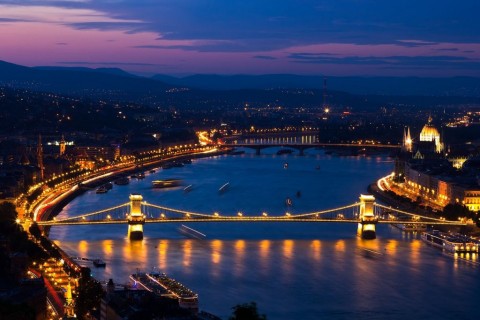 Enjoy the sunshine and the light breeze as you ride by the first and most beautiful bridge of Budapest, with massive pillars and impressive stone lions. Picture Budapest in your head! What’s the first thing that comes to your mind? Of course it’s Chain Bridge! From postcards to movies, the iconic bridge is the most famous sight of the city. Chain Bridge was the first Danube-bridge indeed, but it paved the way for all the others. Right now, there are eight major bridges above the river. It was funded by a Hungarian stateman and polymath, Count István Széchenyi: to this day, the bridge’s official name is Széchenyi Chain Bridge. The bridge is currently awaiting renovation, so make sure you visit it before that starts! Don’t miss the most famous sight of the city: explore the Chain Bridge with Luna Tours and check out the notorious lion statues! 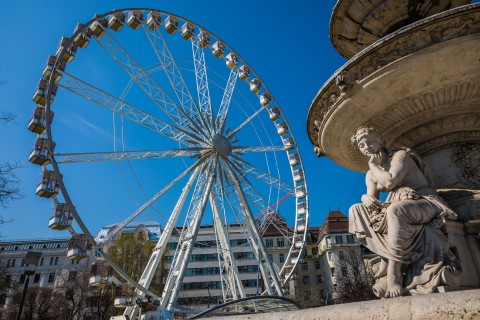 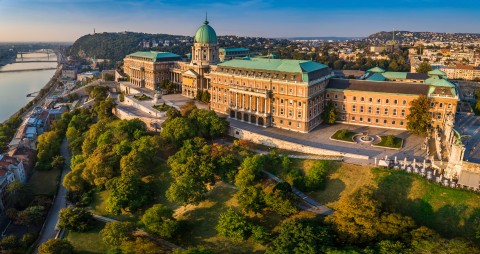 The former Royal Palace has been razed and rebuilt at least half a dozen times over the past seven centuries. Béla IV established a royal residence here in the mid-13th century, and subsequent kings added to the complex. Today, the Royal Palace houses the Hungarian National Gallery, the Budapest History Museum, and the National Széchenyi Library. It's a scenic location. No doubt why it's been used as a background in many films and videos. E.g. Katy Perry's music video "Firework" was shot in the courtyard of the Royal Palace. If you are eager to culture, visit the palace's courtyards during the Wine Festival in September or the Festival of Folk Arts on the 20th of August. Taste a traditional wine or return back home with an artisan souvenir from the festival. 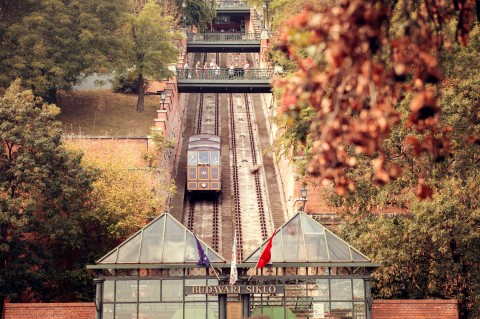 Back then, this was the second funicular railway operating in Europe. The funicular had been meticulously reconstructed and rebuilt in a vintage style after being completely destroyed in a WWII bombing raid. The Buda Castle Funicular was admitted to the list of UNESCO World Heritage sites in 1987. Currently it runs on a 95-metre route of 50 metres elevation and has two carriages. The Buda Castle Funicular has two stations, the lower station is at the Buda end of Chain Bridge and the upper station is on Castle Hill, between the Royal Palace and Sándor Palace. 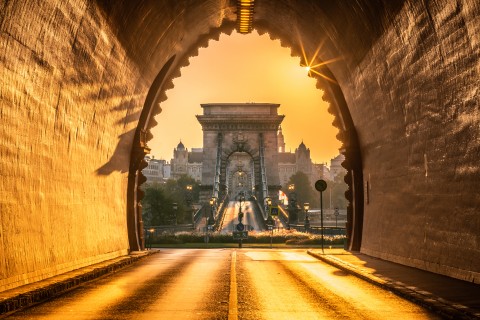 Those coming from the Pest end had to walk round the Castle Hill on the Buda side to be able to proceed westwards. Four years after the completion of the Chain Bridge, the building of a tunnel leading through the hill was started to the plans of Adam Clark. In 1856, the tunnel was opened for foot traffic, and one year later also for motor traffic. Being 350 metres in length, it leads through under the Buda Castle to the other side of the hill. Its length is approximately identical to that of the Chain Bridge, prompting anecdotes according to which the tunnel has only been built so that in rainy weather, the Chain Bridge can be shoved in and be protected from wet conditions. The entry of the tunnel at its Chain Bridge end was also fittingly designed in classicist style. 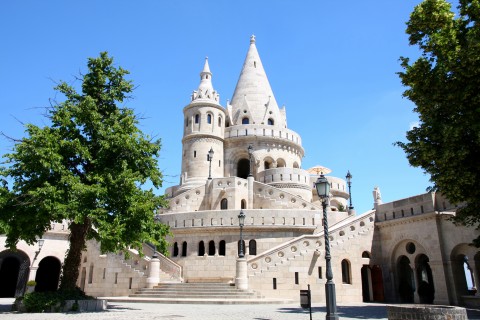 The beautiful castle-like structure on top of the cca. 70 metres tall Castle Dill that can be seen from the Pest side of the city as well is the Fisherman’s Bastion (Halászbástya in Hungarian). The Castle District is famous for having baroque and neo-classical houses, churches and public buildings. Getting up to the top of the hill is easy: Just ride uphill with one our Luna e-scooters. The Castle District has been a UNESCO World Heritage site since 1987. (Tip: The Fishermen’s Bastion is open and free to visit all day throughout autumn and winter. In spring and summer, tickets need to be purchased for certain times of the day.) 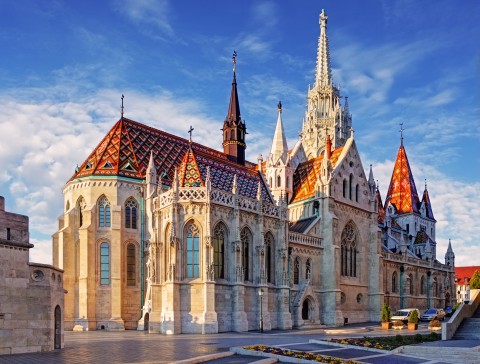 Steps in the northwest corner of the church lead up to the Royal Oratory and the Matthias Church Collection of Ecclesiastical Art (Mátyás-templom Egyházművészeti Gyűteménye), included in the church admission fee, which contains ornate monstrances, reliquaries and chalices, plus replicas of the Crown of St Stephen and other items of the coronation regalia including the coronation throne. Ascending the 200-odd steps of the steeple will bring you to the top of the Panoramic Tower with stunning views of the city. Organ concerts take place in the church on certain evenings continuing a tradition dating from 1867 when Franz Liszt’s Hungarian Coronation Mass was first played here for the coronation of Franz Joseph and Elizabeth, the beloved queen affectionately known as 'Sissi'. 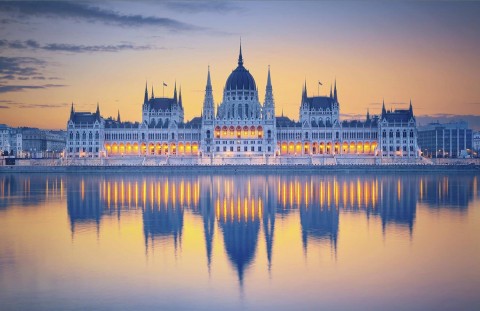 People tend to have a love-hate relationship with politicians - there’s no news in that, and that’s also the case in Hungary. However, there is no Hungarian person on this planet who doesn’t just love the Parliament building and its area. And it’s surely a lovely place: the Liberty Square and the banks of the Danube are just some steps away. You can also take beautiful pictures from here! The Hungarian Parliament is the biggest building of Hungary and it’s also one of the most precious - literally. It contains 40 kilograms of gold! The building also has historical value too, as it has bullet marks from the Second World War. Right now only a small portion of the building is being used by the government. Not only the outside, but the Parliament’s inside is beautiful too. If you have the time we recommend visiting it on a guided tour (actually, you can only go inside with guidance). Inside the Parliament, you can take a look at the most famous relic of Hungary, the Holy Crown, which has an astonishing story too. So don’t hesitate, choose Luna Tours and get to know everything about this magnificent building! 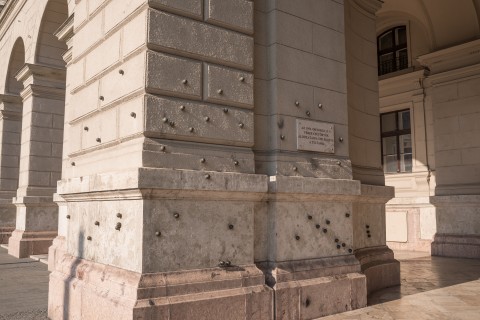 The Memorial commemorates one of the most shocking events of the ’56 Revolution in Hungary: On October 25, now known to Hungarians as Bloody Thursday peaceful protesters congregated at the Parliament Building. To quell the mounting demonstration, Soviet troops and state secret police opened fire on the crowd of several thousand people. Some of the fleeing protesters took shelter behind the façade of the Ministry of Agriculture Building’s colonnade, and as a result, their pursuers fired in their direction, scarring the structure’s exterior in the process. It’s unclear how many died during the massacre at Kossuth Lajos Square—sources vary, citing between 22 and 1000 deaths. Today, dozens of bronze balls, each only slightly smaller than a tennis ball, demarcate where bullet holes from the revolution once riddled the outer wall of the building’s arcade. 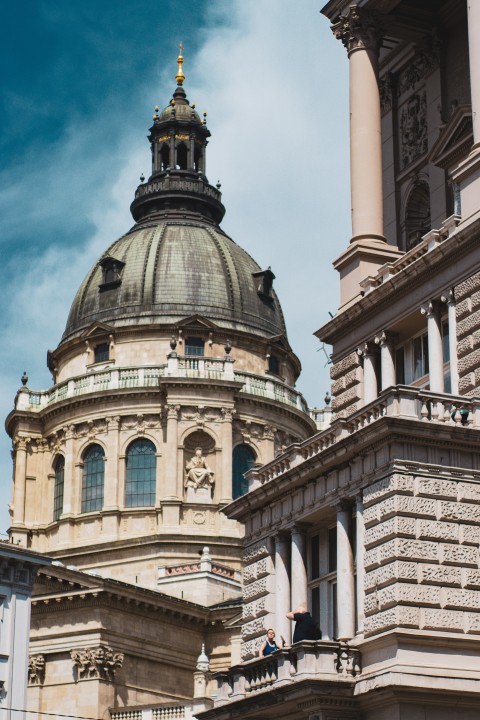 The church is basically one of the newest ones in the city, as it was built for nearly a hundred years and only got finished in 1905. Since then, the building is a true gem in the heart of the city. Even those who don’t consider themselves religious, cannot resist the beauty of the building. The church also holds very important religious relics, including the right hand of Saint Stephen. On the day of the Hungarian Foundation (20th of August), the relic is carried around after the mass. 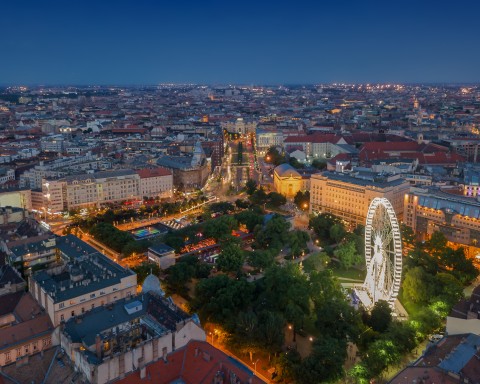 Elizabeth Square (Erzsébet tér in Hungarian) sits in central Pest, right in the heart of downtown Budapest. With plenty of attractions nearby, and easy access to public transit, it's one of the busiest places in the city. At the central building once used as Budapest’s main bus station, you’ll find a couple of bars and restaurants, including the Fröccsterasz, named after Hungary’s popular summer spritzer (fröccs). The other half of Erzsébet tér is mainly filled with the large water feature and the stepped terrace of the prominent Akvárium Klub. Crowds gather outside in summer, either waited on at terrace tables or just hanging around at the water’s edge or sit in the grass to chat, picnic, read a book and get ready for the party.

Our vehicles has built-in light system to be able to see and be seen in every traffic situation!

If you want to take a break and drink a coffee or to take a stunning picture go ahead, but make sure you lock the scooter beforehand.

Your safety comes first to us - we provide helmets for every tour and rental. It is strongly recommended to wear them for your protection.

We make sure you won’t get lost in the city, so we also offer free digital maps and some tips and hints for your sightseeing!

We use cookies to analyse our traffic and improve user experience. We also share information about your use of our site with our advertising and analytics partners who may combine it with other information that you’ve provided to them or that they’ve collected from your use of their services. To continue using this website, please accept our use of cookies below.
Our data protection policy